The exhibition presents a set of photographs from the “Spartakiad” cycle, which has already  become legendary since they were made, not just in our country but also in the world. Not just because the photographer was awarded by the World Press Photo. During the soldiers’ performance, it began to rain and their bodies, smeared with mud, were transformed into absurd statues.

Are these nearly two dozen images produced over the course of a few short minutes a celebration of sport and heroic performance? Or are they a memento, an interception of a marginal situation, a manipulated social bodies? 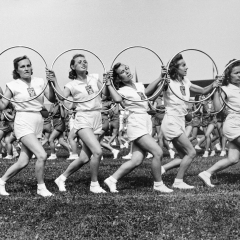